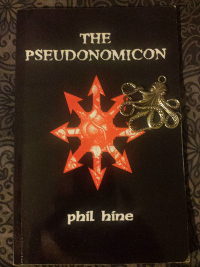 Been a while since my last post, much happening and not much I want to really share, but I will due to it’s supreme oddness and unexpectedness…

Today is apparently the birthday of H.P. Lovecraft, a writer I have loved for many, many years. That has generally been enough. However some very strange events over the last few months are worth noting.

First was during my visit to Glastonbury back in June, a trip that turned odd and surprising in many unexpected ways mostly unconnected with this particular avenue. The event in this case was a copy of Phil Hine’s Pseudonomicon falling off the shelf into my hands while trying to get to something else. Its a slim booklet on the use of H.P Lovecraft within chaos magic. I knew I had to have it!

Then, perhaps due to the ideas within that booklet I started to see Cthulhu or at least get the impression of Lovecraft in lots of different things, most notably the kids PJs which had a nice blue gothic/steampunk like octopus on them. Looked so much HP inspired that was what I kept seeing.

Followed closely by spotting a fun looking Discordian festival which I just kept tabs on as it was far too late to consider arranging a visit this year – maybe next year. Maybe. I don’t know yet.

Finally, the last straw (at least in this stage), was my son pointing out a really cool looking octopus on a stall while at Artemis Gathering. That was on the Sunday – eight days ago. Eight. A significant number in CM.

Since then I’ve had a number of interesting Cthulhu inspired experiences which I’ve had to write down to get them out of my head.

Not sure what this means yet, but appears to be of some significance. Whether I answer the Call of Cthulhu yet is another matter. Certainly open to exploring some more at some point.