In my book, ‘A Path Laid Bare’, I mention my enjoyment of painting. I’ve not painted since the kids came along several years ago but here are many that I produced during that brief time.

Enjoy and if you have any comments then I am always pleased to hear them.

Its amazing the effects both a cold and fatigue can have on the mind. I was considering writing course material based on my Second Life classes for an on-line pagan school, however I’ve had a mad idea of actually hosting the courses myself, here, on this site. Lets going exploring… 🙂

As a result of a comment made during one of my Second Life classes a few months back, I have been busy ….

Due to this process being a deeply personal creative one it would be pointless for me to explain in detail the individual meanings for each divination stone.  They have meaning for me. They may not have the same connection for you.

What I will detail here is the method that I used so that it should be possible for you to take the same journey.

My view with divination is that the physical method such as stones, tea leaves, tarot, skrying, etc all provide patterns that via a light meditative state the open receptive mind can reassemble into meaning.

Where these patterns originate are unimportant for the purpose of this article.  That is something quite deep.

Taking the above view for this task I came to the conclusion that each stone required to have a deep subconscious meaning so that it can facilitate a smooth interpretation during the meditative state.

My approach to this was to make use of basic psychological techniques of word or image association.

First I drew up a list of words or concepts that I felt cover the areas that I would like to use for divination. Interestingly when I counted up the areas it came to 25 which is not far from traditional rune systems, even though some of my ideas have no direct equivalent.  Was that number due to a subconscious feeling of the ‘right number’? Don’t know.

Next step was to associate images to these words. For that I decided that I needed to work quickly and take little time because if I dwelt too long I may blur the original idea.

Therefore I cut up some paper on which I wrote each of these ideas. Taking each one and a pen I read the idea and shut my eyes while I let my hand doodle with the pen. I allowed my thoughts and feelings for that particular idea come to the fore and once I had the image for a few seconds I then stopped and looked at what I had doodled.

Very surprising to find that each piece of paper I did this with some particular area of the doodles exhibited a few strokes of the pen that I felt were distinctive enough to be more than random movements.

I have to say that this process took no more than 30 min to accomplish and the length of time between each attempt although generally consistent I felt that some ideas were more of a struggle to associate images with. Quite possibly there are some psychological meaning to be explored there sometime!

Next I sought my stones. I used pebbles from the beach like my last set. These I painted my symbols on and job done.

That was in fact the easy bit. The hard bit was to come with use, although because I had symbols that would mean more to me than ones created by another person in another time,  my hypothesis was that being so closely linked to my subconscious the reading should be easier.

My first attempt confirmed this magnificently,  the understanding of what lay before me was the clearest I have ever had with any form of divination. That was my initial thoughts,  I have since refined them in light of how the events they portrayed unfolded and the subtleties that I missed.

Even so the understanding I am still impressed with, and they fulfilled the original task that was to create a symbolic system that is not based on any existing ones and still have the same success.  I still have to learn what they are saying, as I have not gained instant 100% success in divination!

The point you can take away with is that although there is nothing wrong with tradition but if a system does not work for you, you can invent and you don’t have to feel you are not being pagan because you are not using something everyone knows about.

Systems and methods have to come from somewhere at some point in the past. Why not you, and now?

I’ve had a busy few days making this wonderful instrument from my corkscrew hazel tree. 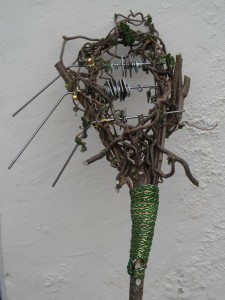 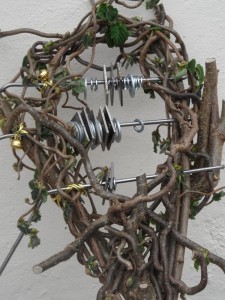 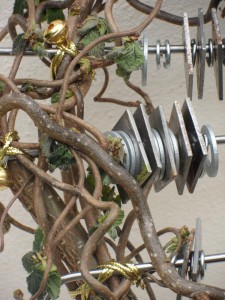 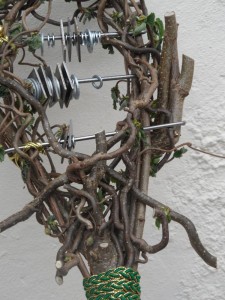 A Senet board game based on some images from the boards found in various tombs. Made this many years ago! 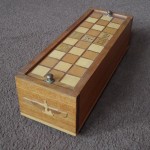 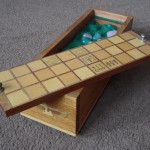 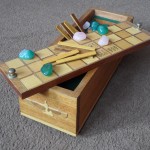 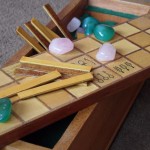 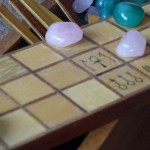