Been wand making for Beltane… 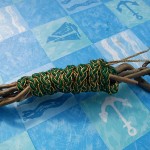 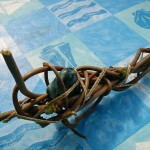 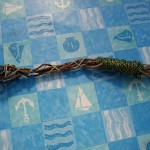 Once, I Dreamt of Egypt

I have such wonderful memories of my time in Egypt. One was a day much like the others just wandering the crowded and chaotic streets of Cairo, looking for something better from the hustle of people pulling at me with their trinkets every way I turn.

I rounded a corner and spotted a secluded stall radiating golden rays of light from the open front. I urged my legs to propel myself through the mass of bodies to where my eyes fixed upon that golden oasis.

What I found filled me with wonder, a table heaped with an amazing mass of gold objects; statues, necklaces, boxes, vases and all manner of things. Even to my untutored eyes they appeared to be wondrously old and magnificently crafted, and completely out of place amongst the crude objects pedalled around me. I wondered if they’d been plundered from tombs.

What marked this unique stall as bizarre for me was that no one around seemed to being paying this incredibly valuable hoard any attention. Guiltily, I felt relieved at this.

I started when materialising out of the shadows came an old haggard man wrapped in once white linen, he gave me a black and misshapen toothed grin as he held a golden ring topped with a scarab up to my face. The hypnotic sun light reflecting into my eyes while he twisted his wrist captivated me with the sparkle of turquoise enamels and the light snaking along the fine etching. It seemed alive. How could something so fine be made by clumsy human hands?

Hurriedly I paid him, not even attempting to haggle over the overly inflated price, but I suppose that depends upon what price you would put on something this exquisite. To me it was worth so much more.

I clutched my prize to my chest and regretfully forced myself back to into the crowd aiming to make for my hotel room. Then amongst the rabble I causally threw a glance back to remember the location of the stall. My heart leapt, I could only see a wall. I spun around and no, I couldn’t see it anywhere!

My perception of my surroundings seemed to change, people looked at me strangely, and now they did not clamour over me with their incessant tugging. I felt confused and disorientated, but forcing them from my mind I pushed on to the hotel.

Eventually closing my hotel door behind me I drank in the coolness of the room, inhaled the refreshing air which was a marked difference from the stifling rarefied heat outside.

I walking to the foot of my bed I sat down. I held up the ring letting it tumble continuously between my fingers and watching it tumble as light caught it. Somehow the ring appeared on my finger, it felt so snug, a perfect fit.

The rush of excitement faded slightly and I realised how tired I felt from my travels around the city. After a long yawn I eased off my boots and stretched out on the bed as I loosed my shirt.

The ring felt warm as I wrapped it in a ball of fingers and held it to my chest. I heaved a sigh as my eyes heavy surrendered to sleep and the most wondrous dream of my life.

I remember first a rush of air in the total darkness that surrounded me. It felt exhilarating and I still can’t be sure if I was falling or if it was just a strong wind.

My eyes then caught a point of light that slowly grew into shape of a woman sitting with her arms stretched out along the length of feathered wings. She wore a plain white linen dress which covered her legs that were bent up to her chest and a long feather was bound to her forehead.

Gradually in the darkness the surface of an infinite expanse of turquoise water rippled into view, it’s gentle waves lapped over my feet. This brought to my attention the awareness of my body. I looked down and I saw myself wrapped as a mummy with my arms bound tight across my chest and my hands clutching a crook and flail. I remember for some reason this did not concern me even though I felt the tight constricting bandages around my limbs.

Any further thought on this was interrupted by a glimmer on the water’s surface in front of me.

Rushing rapidly towards me across the rippling water came a streak of dazzling light as the edge of the sun far ahead rose gradually. I thought I could almost hear it sizzle as the beautiful shining disk which in life I couldn’t look upon gracefully erupted from the water. Watching it rise higher and higher I noticed the dark sky dotted with many points of dim light which gave the feeling of tremendous distance.

My attention was then pulled to two bubbling pools of water some distance in front of me.

From these rose the forms of two people, one a man and like me wrapped entirely as a mummy with a strange cone like headdress and a long plaited beard jutting from his chin. The other was a woman again wearing a simple white linen dress, and her head was adorned with a large golden disk which was flanked by two long thin horns.

Their bodies seemed to glow with their own light and the vision was clearer than anything that I have seen with my eyes. With nothing moving I could not estimate how long I looked in awe upon these two motionless statues; yet they seemed alive.

The sun light then subtly changed and against the dark starry sky I made out other shapes moving closer. They too were people, but many had the heads of animals and all likewise gave the impression of ancient wisdom.

Closer, still closer. I could not hear their words at first, I only saw their mouths – or what I would class as mouths – open and close. Then I did hear their sound.

“We come forth!” A quiet murmur at first gradually becoming a chant. “We come forth! WE COME FORTH!” The voices became a deafening crescendo. Above that though came something like a mothers soft and reassuring voice. It came from her.

The scene dissolved and feeling the bed under me I tried to fight it, to retain the image in my mind but it seemed dull and colourless in comparison.

Realising I could not hold on to it, I opened my eyes and I propped myself up with my elbows and noticed the room moving into shadows. Sunset already? I checked my watch this confirmed the time was early evening and I could not believe I had spent half the day here
considering I still felt tired.

A sound in the room drew my attention to a sleek black cat that was sitting on the open window sill. It watched me, its eyes glittering with feline intelligence. Against the black fur I saw the glint of a gold chain around its neck. I swung my legs off the bed and walked slowly over to the cat.

Moving closer I saw hanging from the chain a blue scarab similar to mine. I looked down at my hand intending to refresh my mind. The ring was gone. I suppose my startled reaction scared the cat as when I looked up that too was gone.

I will always remember the time I spent in magical Egypt. Those magnificent buildings, treasures and of course the Dream.