Wolfenhowle Press and I are proud to announce the release of the 5th published work under them, and the first in a new series of booklets on Kemetic practice.

This first booklet Keeping It Personal Booklet covers everyday life from food to work. It is absolutely packed with detail, and various photos often from my personal practice.

Hope you love it as much as us!

Available now for £3.50 from [my shop] or the [Wolfenhowle Press Website] 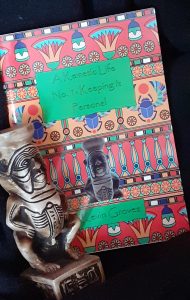 After the disappointment of postponement of the Glastonbury (and most likely the rest) of the story telling events (look out for the new dates that are coming) I do have some exciting news.

While I will still tell the many stories I already know, I’ve been spending the morning going through much of my bookshelf (still a stack to go) looking for inspiration for more stories.

Wow I have pages of interesting ideas ranging from the more obscure and unusual tales of the gods, to stories on daily life including dramatisation of real life documented court cases! I love a good murder mystery and a bit of gossip

I want to bring other aspects of ancient Egypt to life so I’ve loads of ideas to work on dramatisation of the documented rituals, festivals and religious texts to help understand what they saw in all of this, and why such beauty caught hold of me, my imagination and my life in my childhood. I’m sure many others who have a similar love for ancient know exactly what I’m saying

I think I’ve just given myself many months of hard work. It will be worth it though I see the imagery in my head already.

Back to the reading….

Ancient Egyptian Storytelling, 14th May 2021. 6.30pm in the Avalon Room@Glastonbury! 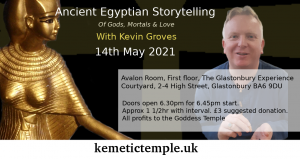 Further to my last blog entry, I’m now at a point where I think I can open the doors to a new Kemetic community focused primarily on the UK but hey, why not for everyone? 🙂

Early days, and its never an easy thing to start something new, so things are a little bare at this point. This is where dragging anyone with an interest in will help.

I don’t care if you are a full Kemetic re-constructionist or just interested in adding some ancient Egyptian deity to your existing practices – all are welcome.

Share and lets get this buzzing, I know there are plenty of Kemetics out there, we just don’t often come out of to play that often 😉

Thanks and see you there!

Several years ago I ventured out into the pagan community searching for fellow Kemetic practitioners or re-constructionists.

Luckily, I found a few scattered around the UK and further afield, though depressingly searching for a larger pool I thought there could be groups or organisations that might offer a better chance. Unfortunately apart from some short lived groups (perhaps failing because of the low Kemetic population) there doesn’t appear to be any that offer what I am after. Sure, there are some overseas ones that have UK extensions but they don’t appeal to me due to how they’ve approached Kemetic practice.

Of course there have been plenty of general pagan groups and while I’ve really enjoyed those opportunities, the practice of ancient Egyptian magic and it’s approach to deity does not quite align with how much of the pagan community do theirs. This has resulted in some disappointment which is a real shame.

All is not lost though. From those who appear to be in a similar situation I’ve been thinking about creating a corner for us local Kemetics to hang out. Now, I may have no success, it may fail like all of the other past groups. On the other hand it might work – we won’t know if we don’t try.

If any Kemetics out there – doesn’t matter if you are UK or not I suppose – are interested keep in touch and I will announce things once I’ve sorted out the basics.